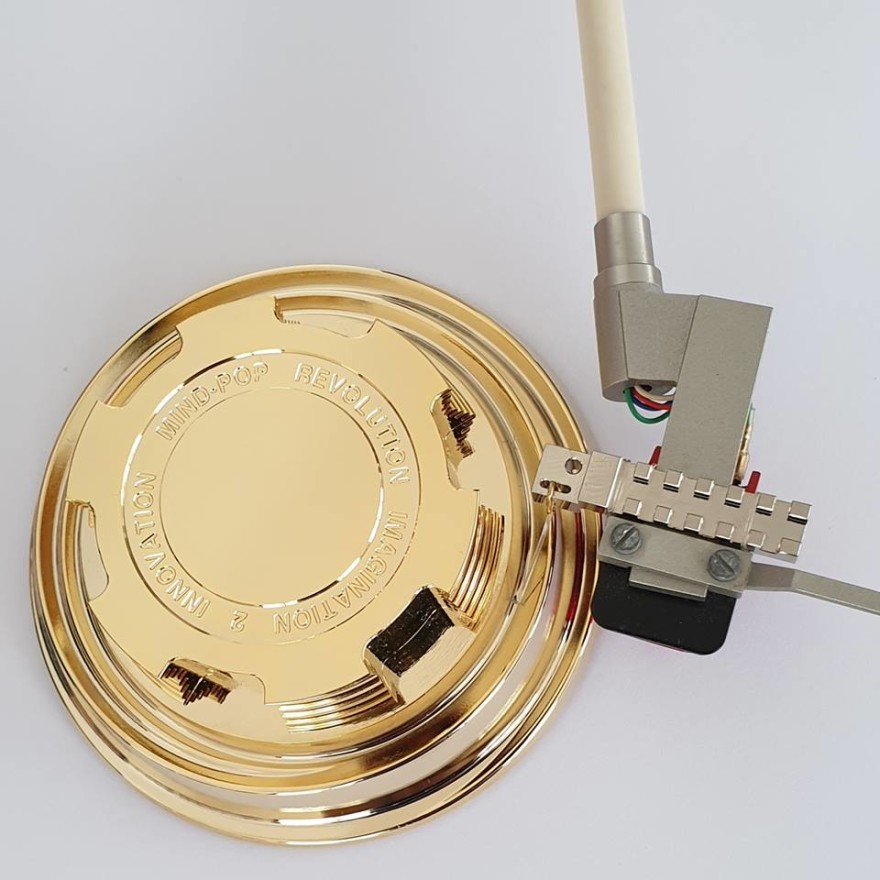 We are proud to announce that the “revolutionary”  The Mind Pop REVOLUTION TT puck became now our latest addition to the vinyl portfolio. Why such an excitement ? Let Us explain. This is not just an ordinary puck, such a things in different shapes and colours we could have in our offer for ages if that was a case, but as always we have been looking long and hunting something special and innovative to put into your attention. And this is it. So what makes is so different than the other more or less heavy weights available on the market? Check it!

Nobody would explain the idea better than the designer himself, let’s put then Mr.Gaby Mindreci on lectern to put some light on his creation.

” As a new invention comes along for a device capable of associating distinct functions previously accomplished by separate devices, it is often difficult to describe such device in one succinct word. In the world of Hi-Fi analog audio equipment we find many separate devices specifically designed to improve the quality of the audio signal extracted from the groove. When it comes to vinyl, dedicated purists, aka audiophiles, appear to agree unanimously that highest purity in sound comes from turntables and tonearm combinations which employ the least complex electro-mechanical configurations, especially those doing away with intricate electronics or internal automation that may affect the mechanical isolation of the conversion system. Many of such devices were refined over decades of development leading to state-of-the-art machines, some of which could set the enthusiast back by multiple thousands and even tens of thousands in hard currency. However, with purity we lose the convenience and the comfort otherwise available with automatic turntables, some of which were marvels of technology in their own right at the time when the race for automation and complications was at its highest: some decades ago, too many decades ago that went by too fast…

The Mind-Pop Revolution name was given to a new product which combines record stabilisation with the ability to lift the tonearm at the end of the play. We didn’t know exactly what to call it… is it a bird, is it a plane?… And then we realised, we brought to the industry a new term: the presslift!
​
The Mind-Pop Revolution presslift is the newest improvement instrument for manual turntables! The “press” is for the record, the “lift” is for your peace of mind.”

So now, at least we all know what to think about it. More than that would be hard to say without trying , so let’s do so. The proof of the pudding is always in its taste, as they say. As a exclusive distributors for the brand we are going to have a stock here in the UK and our appointed dealers will be glad to help you with demo, installation, which is easy like a breath BTW, and the purchase. Feel free to get in touch should you have any further questions.